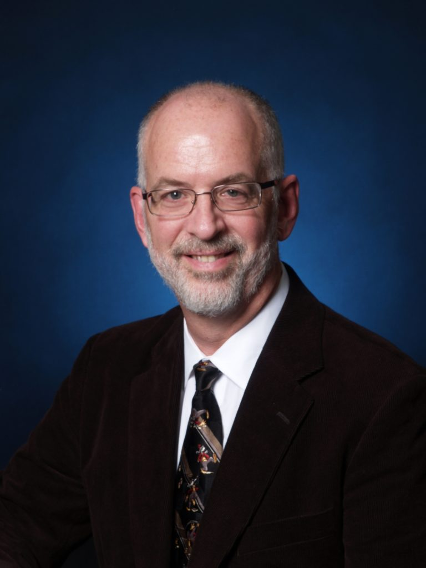 Mark and his siblings, Lois Rausch, Linda Hasser, and Thomas Loepker, all attended St. Boniface Grade School before they each moved on to Central Catholic High School. While at CC, Mark was on the boys golf team, where he learned the importance of humility and humor.

“I remember the acceptance of my golf teammates who knew every team has a first and a last player. I was honored to bring up the rear and fill the role of last,” said Mark. Although Mark enjoyed golf, his real passion was music. He had supporting roles in Sound of Music and Oklahoma culminating in Fiddler on the Roof as Tevye. After graduating from Central Catholic in 1972, Mark attended Purdue University. He continued to utilize his musical talents in the Purdue Varsity Glee Club, where he met his wife, Sandra S. Sandleben, who was in the Purduettes. Mark and Sandy were married in 1978, and they have two children, Andrea Kassel and Amanda Rae, and three grandchildren, Ryan and Ella (Andrea) and Xavier (Amanda).

In 1977, Mark received his commission through AFROTC and began his 25-year military career. Lieutenant Colonel (Retired) Loepker last served with the Command, Control, Communications, and Computer Systems Directorate, United States European Command, Stuttgart, Germany, and was responsible for all European theater policy and policy enforcement concerning information warfare and communications and computer security. Mark retired from the Air Force and accepted a position with the National Security Agency (NSA) in 1999.

In some of his past NSA assignments, Mark was responsible for managing the Agency’s interactions with the members and staff of the U.S. Senate and House of Representatives. Mark was also the Director of the National Information Assurance Partnership established between the NSA and the National Institute of Standards and Technology to evaluate IT product conformance to international standards. The program is also a partnership between the public and private sectors to help consumers’ select secure commercial off-the-shelf information technology (IT) products and to help manufacturers gain acceptance in the global marketplace.

Mark was Purdue’s NSA Security Education Academic Liaison. Working with Dr. Melissa Dark of Purdue, Melissa and Mark pioneered the first NSA sponsored class where graduate students used NSA technical challenges for their classwork. The program now has over 22 Universities and 16 sponsoring Agencies. Mark was honored by Purdue Polytechnic Institute as a Distinguished Technology Alumni in 2019.

Mark retired from NSA in 2017 after a total of 43 years of government service. He currently serves as the Director of Education for the National Cryptologic Museum Foundation’s Cyber Center for Education and Innovation (CCEI), Home of the National Cryptologic Museum. The CCEI focuses on developing educational programs and aligning STEM initiatives with national cyber curriculum standards. Throughout Mark’s professional career, the influence of his Catholic upbringing and education has stayed with him. In high school, he remembers being kidded by his friends that he would be the next parish priest, and on May 11, 2013, Mark was ordained a Deacon for the Archdiocese of Baltimore. In 2002 Mark attended a Cursillo weekend, which opened up his call to the Diaconate. In 2009, Mark entered formation culminating in his 2013 ordination. You will note the iPad in the picture. Air Force Lt Amanda Loepker was deployed in Afghanistan and virtually attended the ordination. Mark is assigned to Our Lady of the Fields in Millersville MD and as a Hospital Chaplain at the University of Maryland Medical Center. Mark continues to stay connected to Central Catholic and his class, and the friendships he made here have stood the test of time. “Today’s technology allows us to enjoy each other’s families, joys, sorrows, achievements, and keeps us connected,” said Mark. “I will always cherish my years as a Knight, for it does not end on graduation. It is always remembered.”

How did your education at LCSS prepare you for college and your career and vocation?

LCSS provided the rich foundation that I was able to leverage throughout my education, professional, and personal life. The core values of service to others rooted in the hope our Catholic faith provides weathers all storms. Life’s challenges present constant opportunities to make choices.

How did LCSS help to shape your faith?

The faith-based 12-year learning environment coupled with true friendships that continue today supports me no matter what comes my way. Having the benefit of faith rooted education, sustained and deepened my understanding of God’s love, grace, and mercy, and in His time led me to accept my deaconate vocation. What is your favorite memory from your years at LCSS? Some of my fondest memories are music centered. The many CC Chorus performances along with performing in the annual musicals. One favorite memory was Fiddler on the Roof, where I played Tevye. That year the principal, Fr. Vernon, magnanimously allowed any male who wanted to perform to also grow a beard. With this enticement, many of the high school boys joined the theater ranks, including many who were also athletes. The bottle dance was awesome thanks to their athletic abilities. The entire cast was wonderful. We just seemed to click that year.

To sum up the experience, it is all about love and family. LCSS keeps Jesus in the educational formula. He is pure love and exemplifies family life. No matter what happens, the joys, pain, health, illness, happiness, or sadness are dealt with through love and family. It is what gets us through. The daily exposure of Jesus’ love, grace, and mercy infused our very being that when needed, it shapes our responses. I am grateful for the experience and will always remember.