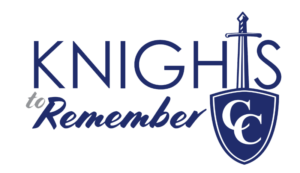 A tradition was started in 2006 to acknowledge distinguished Central Catholic alumni for their achievements in spiritual, community, service and professional life. This is the highest accolade reserved solely for alumni who are making a difference in their community, state, nation or Church. Alumni are eligible for nomination fifteen years after graduation from Central Catholic Jr. – Sr. High School and must meet the following criteria to be considered:

A new tradition started in 2020 to recognize and celebrate faculty and staff members and administrators in the Lafayette Catholic School System who have made extraordinary contributions of time and effort to the school system or who exceed expectations for their loyalty, involvement, and identification with LCSS. Nominees are eligible if employed in the Lafayette Catholic School System for at least 15 years as a teacher, staff and/or administrator, or if they pass away prior to their fifteenth year in LCSS, and who meet the following criteria:

A new tradition started in 2020 to recognize and celebrate individuals who have made an extraordinary contribution of time and effort to the Lafayette Catholic School System or who exceed expectations for their loyalty, involvement, and identification with LCSS. An honorary nominee is someone who is not a graduate of Central Catholic and who does not work for the school system, but whose actions in support of the schools are truly exemplary and highly valued. Nominees must meet the following criteria to be considered:

Nominations are accepted year-round by the Lafayette Catholic School Advancement Office. All nominees are reviewed by a selection committee composed of the LCSS Advancement Committee, CC alumni, and school leaders during the month of March. Nominees who are not selected, remain in the nomination pool for a maximum of three years. After three years, the nominee must be nominated again to be considered for selection. Winners are announced at the annual Blue Knight Auction held in April. The Distinguished Alumni award is presented at a luncheon that takes place graduation weekend and the winners are recognized on stage during the commencement ceremonies. Recognition plans for the NEW honorary teacher, administrator, staff, and alumni will be announced soon.