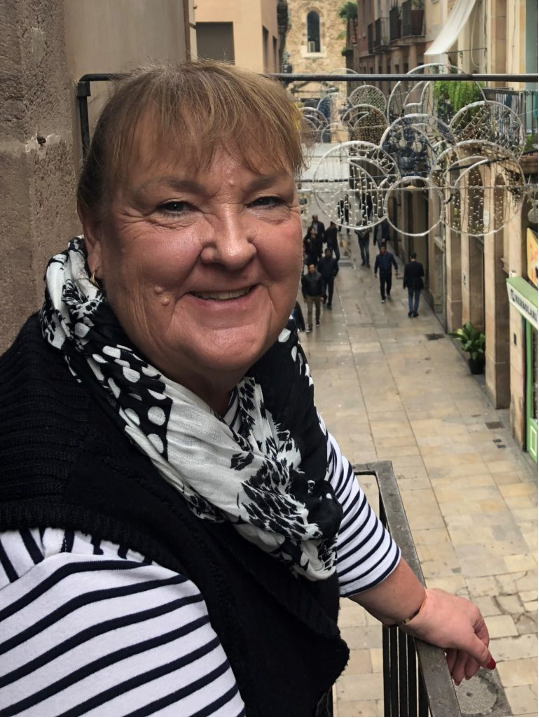 After high school, Joyce attended Purdue University where she earned a BA in Visual Design in 1972. One year, while in college, she spent her entire spring break painting “Super Graphics” on the cement block walls to brighten up several CC classrooms. Joyce’s dedication to LCSS has been steadfast throughout her life, and she has spearheaded, or significantly contributed to, nearly every major project – from keeping CC open in the early 1990s, to extensively assisting with the Blue Knight Auction for many years and co-chairing the 40th and 50th Central Catholic Anniversary Reunions. Joyce was chairman of the Development Committee for several years and served on the Governance Board. She was instrumental in the Building Faith and Futures Capital Campaign and is currently a director on the LACS Foundation Board. She also envisioned the Jr. High Plaza and oversaw its design, fundraising, and completion in 2003. Joyce served as President of the Parent’s Guild, coached a Jr. High Academic Bowl team and spoke at numerous Career Fairs.

Joyce has been involved in the Greater Lafayette community as well, including serving as President of the Advertising Club of Lafayette, The Downtown Business Center, and the Len Treece Boys and Girls Club Board of Directors. She also served as a director for the 4-H Exhibit Association.

Joyce opened Haan and Miskunas Advertising and Marketing in 1976 and earned a reputation for creativity, ethics, and attentive customer service. She and her agency team (transitioned to be called Haan and Associates) were honored numerous times for their work, receiving more than 70 Gold Addy Awards. Joyce also received an award from the American Advertising Federation “in recognition of outstanding contributions to advertising and furthering the industry’s standards, creative excellence and responsibility in areas of social concern”. Joyce sold her agency in 2004 and officially retired after 28 years in the business. Since retiring, Joyce enjoys some volunteer work. She also loves traveling with her husband Steve and with family and friends, spending time with her children and her nine grandchildren, and completing various projects around her home. She and Steve enjoy spending the cold winter months in Naples Florida and their boat “The Joy-Sea”.

How did your education at LCSS prepare you for college and your career?

During my time at CC, the Lance Yearbook was an award-winning yearbook moderated by Fr. George Loner. My friend Ellen Schmidt Poglits was the editor and I was the Layout Editor. To learn about the process, the two of us were sent to a yearbook short-course at the University of Detroit (during the Detroit riots of summer 1967 I might note). It was there that I learned about various type fonts, the mathematical formulas for figuring out how much copy would fit in a certain space at what point size, as well as how important balance and proportion were in page layout. It really opened my eyes to visual design and by the time I came home, I knew what I wanted to study in college. CC also prepared me well to succeed in my Liberal Arts courses at Purdue. I found that my ability to write was invaluable in my advertising career.

How did LCSS help to shape your faith?

Since my family lived so far out in the county, I went to public schools for my first 8 years with just an hour of Saturday Catechism each week. I believe there were just two in my class who were Catholic, so if you could not eat a hot dog at a Friday night wiener roast, or if you gave up candy for lent, you were left feeling kind of odd. Of course, I was lucky to have great Catholic role models in my parents, but it helped my faith so much to be surrounded by other kids who believed as I did and also to have one-on-one experiences with the sisters and priests who populated CC at the time. Bringing the faith into all aspects of my education was invaluable. And being able to go to Mass and to pray at school was a new and appreciated experience for me. Describe one of your favorite memories of LCSS.

Some of my favorite memories of high school include Sr. Augustine, who taught algebra. She must have had the patience of a saint since we creative types are typically not great in math. I also fondly remember Fr. Loner, and the yearbook trips on Shawn Shawn the Leprechaun, an old green school bus. It’s hard to single out just one thing, so perhaps I’ll just say a favorite thing was the atmosphere of pride in being a student there; in the traditions that were established, and our determination to be better than the Red Devils across the river or the “big school” Bronchos up the street. CC was small enough to know almost everyone who went to school there, but we were huge in our aspirations and our accomplishments. I loved that.

As I was remembering earlier the racial disturbances in Detroit in 1967 while Ellen and I were there, (National Guard Troops were stationed on our dorm roof!) I decided to point out to our students today that our senior year was the year that Bobby Kennedy and Doctor Martin Luther King were both assassinated and only 4 years after seeing our first Catholic President shot and killed. The Vietnam Conflict was in full swing with anti-war demonstrations including marches on Washington DC, and flag burning taking place on many college campuses. Friends were soon being drafted. It made me think of all you are going through today. No, we did not have a pandemic, and thank God for that. But it was all very tumultuous and stressful back then too. Just try to keep your eye on the prize and remember to never lose faith. This too shall pass. And your faith will see you through! Really!