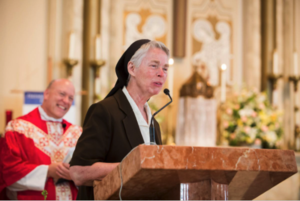 Sr. Lenore has been an educator and principal since 1968, serving in various locations in Indiana, Illinois, and Louisiana. In 2000, she became principal of St. Boniface School, and after 21 years of service Sr. Lenore is retiring this year. During her tenure at the school, she has been a key part of the community, developing partnerships among alumni, families of alumni, local civic leaders, interested neighbors, the neighborhood association, local industry, and Purdue University. Through these partnerships, she has helped to renovate the 113 year old St. Boniface School.

She created Christlike servant leaders with the idea of forming community leaders through the formation and education of the whole child. Sr. Lenore has also received multiple awards over the years including receiving Key to the City of Lafayette and the Sagamore of the Wabash, Indiana's highest citizen award.