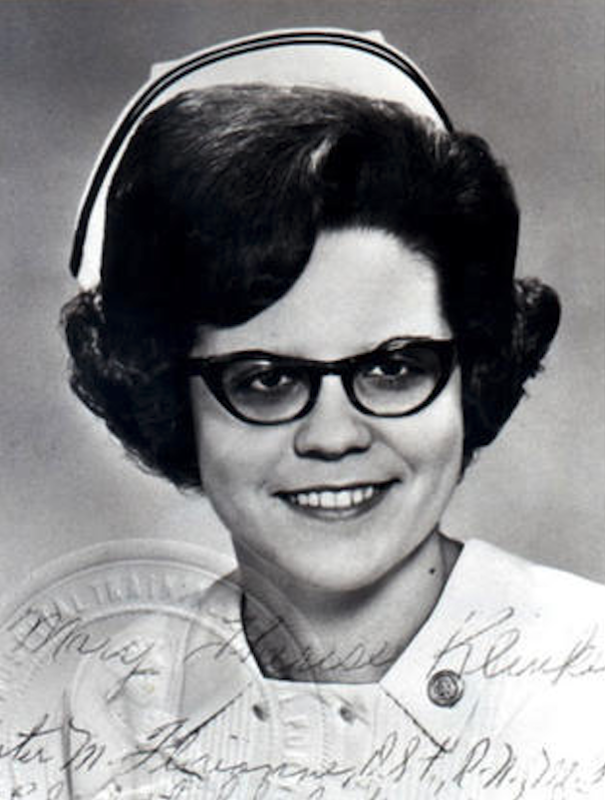 On April 4, 1975, as Saigon was about to fall, Mary Therese Klinker, class of 1965, volunteered to help on a mercy flight from Vietnam. The plane was on a mission to rescue hundreds of orphans and bring them back to the U.S. for adoption. This was an effort that became known as Operation Babylift. She flew into the former South Vietnamese capital on a giant C-5 transport plane to pick up the babies, many packed three to a box.


While experiencing an in-flight emergency and rapid decompression after lift-off from the airport, the plane attempted to return to the airfield. Instead, it crashed in a rice paddy short of the runway, and Mary Klinker was killed. She was 27 years old.


Mary went through St. Lawrence grade school and graduated from Central Catholic. She was active in the block section, Spanish Club and CYO. She is remembered as quiet and rather serious. Her brother Don is quoted as saying, “She was serious about life and she was serious about living. She did a lot of living...probably more in her young life than most people do their whole lifetime.”

After graduation, Mary got her R.N. from the St. Elizabeth School of Nursing in 1968 and worked at the hospital for one year before she joined the Air Force as a flight nurse. After leaving Lafayette, she cared for soldiers wounded in Vietnam and for a time she worked with U.S. prisoners of war. She was in the Philippines teaching courses to medics assigned in Vietnam when she volunteered for her last flight.


As related by an eyewitness, Capt. Klinker was seen leaving her secured position to initiate CPR to an individual who was seriously injured after the first impact. Upon subsequent impacts and eventual disintegration of the huge transport plane, Capt. Klinker was killed although many on board survived. As a highly dedicated, caring, courageous and professional medical-crew member, she was posthumously awarded the Airman’s Medal for Heroism and the Meritorious Service Medal among others. Klinker is one of eight women whose names are listed on the Vietnam Veterans Memorial in Washington, D.C.


In conjunction with the local chapter of the Daughters of the American Revolution, Central Catholic is excited to announce that a historic marker will be placed on the grounds of CC. The DAR sponsored marker will be part of the Spiritual Plaza that is being constructed in front of Central Catholic this summer. The plaza will include a new front sign, a new sidewalk, inclusion of the 10 commandments and the beatitudes, and the historical marker for Captain Klinker.